Aim: The purpose of this study is to find a solution to the addressed H∞ consensus problem for a class of linear multi-agent systems subject to measurement outliers.

Methods: By choosing a suitable Lyapunov function, the sufficient condition is obtained, which can guarantee the consensus error dynamic system satisfying the given H∞ consensus performance. The LMI approach is employed to design the desired controller. With Matlab LMI toolbox, a numerical example was conducted to demonstrate the effectiveness of the proposed observer-based control protocol in the simulation environment.

Conclusion: A solution to the addressed multi-agent consensus problem subject to measurement outliers was found by designing an observer-based consensus controller. The obtained results can be extended to sensor networks, neural networks, and nonlinear multi-agent systems.

A smart computing system is usually composed of a number of smart mobile nodes. To maintain the prespecific system performance requirement in the presence of certain sudden cases, researchers have employed many intelligent methods to cope with the computing problem for different types of practical systems. With the development of science and technology, the study of the smart computing problem for interconnected systems has become a hot research topic, and much effort has been made in many application fields, such as smart grids[1]. It is worth mentioning that the consensus problem has shown a crucial role in theoretical and practical aspects of interconnected systems and has stirred up a wave of research (see[2,3]).

In the past few decades, the research on collective behaviors of multiple networked agents has attracted attention owing to the wide range of practical applications referring to robotics, satellite networks, unmanned vehicles, sensor networks, and so on. Consensus, as one of the most typical collective behaviors, aims to let the states of a group of homogeneous or heterogeneous agents in light of the local shared neighboring information reach a common value[4,5]. Focusing on the consensus control problem, researchers in different research fields have made great efforts and numerous research results have been published (see[6] and the references therein). To cater to the robustness requirement of multi-agent systems, the H∞ consensus problem is put forward in ref.[7], which is extended to the H∞ consensus control problem in ref.[8]. Until now, the H∞ consensus problem has been studied deeply and many remarkable results have been published (see, e.g.,[9-16]). In particular, the H∞-consensus control problem under round-robin protocol is studied for a class of linear multi-agent systems in ref.[15]. Further, in ref.[16], the leader–follower H∞-consensus problem is investigated for a class of nonlinear multi-agent systems under semi-Markovian switching topologies with partially unknown transition rates.

In recent decades, the observer-based H∞ consensus problem for multi-agent systems has attracted a large amount of research attention, and many remarkable research results have been published in the literature (see, e.g.[4,19-21]). In ref.[19], a robust yet reliable consensus control law against actuator faults is proposed, under which the desired control performance can be ensured. In ref.[4], the observer-type event-triggered H∞ consensus control problem is studied in a finite-time horizon for a class of discrete time-varying multi-agent systems subject to external disturbances and missing measurements.

In the above-mentioned studies, the impacts of missing measurements, actuator faults, and redundant channels on multi-agent consensus performance have been investigated. In practical applications, it is noted that outlier is another common phenomenon mainly originating from sensor or communication failures, disturbances in the environment, human errors, and so on, which will contaminate the measurements and thus affect the control performance. To mitigate the effect of measurement outliers, several research efforts have been made (see[22-26]). For example, in[22], a novel observer including a saturation function with variable saturation limits is constructed. Based on the results, the state estimation problem for neural networks is studied in ref.[23] and the fault detection problem is considered in T-S fuzzy system in ref.[26]. In addition, the method proposed for outliers detection in wireless sensor networks has been studied, which is implemented within a hierarchical multi-agent framework in ref.[27]. It is worth mentioning that the H∞ consensus control problem based on such a novel observer for linear multi-agent systems has not yet gained adequate attention, and this constitutes the main motivation of this paper.

Consider a multi-agent system with N agents under a fixed network topology. Let

be a directed graph including a node set

and an edge set

. If an edge exists between nodes i and j, we denote

and node j is called a neighbor of node i and vice versa; if no edge exists between nodes i and j, it means

denote all neighbors of node i. Moreover, define the Laplacian matrix

Consider a discrete linear multi-agent system with N agents. The dynamics of ith agent can be expressed by

is the control input,

is the measurement output,

are the system noise and measurement disturbance, respectively, which are assumed to belong to l2 [0, M]. A, B, C, D, and E are known time-invariant matrices with appropriate dimensions.

In this paper, we consider a case that outliers may occur in the measurement. In practical applications, outliers may originate from sensor or communication failures, disturbances in the environment, human errors, and so on. To mitigate the effect of measurement outliers, we construct an observer-based control protocol of the following form for agent i:

An auxiliary variable qi(k) is introduced to simplify the notation expression, which is defined as follows: 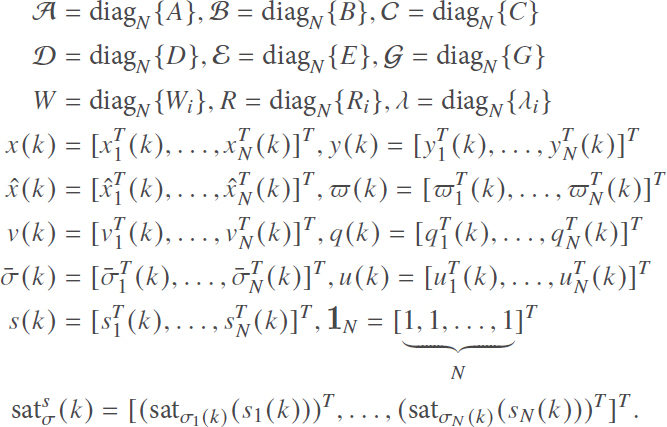 The proposed observer-based control protocol in Equation (3) can be rewritten as follows:

Then, the augmented auxiliary variable q(k) has the following form:

Definition 1Given the positive definite matrix U = UT > 0 and the disturbance attenuation level γ > 0, if the following inequality

, it is said that the multi-agent system in Equation (1) can achieve the H∞consensus performance index in Equation (11) over a finite horizon [0, M].

In this paper, our objective is to design appropriate parameter matrices and scalars {G, λi, Ri,Wi, K} for the proposed observer-based control protocol in Equation (3) such that the multi-agent system in Equation (1) can achieve consensus.

In this section, a solution is found to the addressed multi-agent consensus problem by properly designing the desired controller in Equation (3). The following theorem gives a sufficient condition under which the augmented system in Equation (10) can achieve the given H∞ consensus performance in Equation (11).

Firstly, we give the following assumption and lemma which are useful to obtain our main results.

For the matrix B, there exist two orthogonal matrices

is a full-column rank matrix. If matrix P1has the structure

, and the definitions of T1and T2are given in Equation (12), then a nonsingular matrix

proof 1Construct the following Lyapunov-like functional function for the augmented system in Equation (10):

According to Lemma 1.6 in[28], the following sector constraint condition can be obtained:

Taking the H∞consensus performance in Equation (11) into consideration, it follows from Equations(16)and(17)that

By noticing the initial condition

, we have from Equation (18) that the H∞consensus performance requirement in Equation (11) is achieved when Equation (14) holds. The proof is now complete.

According to the results in Theorem 1, the sufficient condition guaranteeing the augmented system in Equation (10) achieves the H∞ consensus performance in Equation (11) is obtained. Thus, we are now ready to design the parameters of the proposed controller in Equation (3) in terms of the following theorem.

, T1and T2being given in Equation (12), and some parameter matrices and scalars {G, λi, Ri,Wi, K0}, under the initial condition

Moreover, the parameters of desired controller are given by

proof 2Noting Assumption 1 and Lemma 1, we can obtain that there exists a nonsingular matrix

that satisfies BP0 = P1B. Then, we can obtain P0as follows:

; then, in light of the Schur complement lemma, Equation (19) can easily be obtained from Equation (14). The proof of this theorem is now complete.

where Ū = ŪT> 0 is a positive definite matrix and ȳ> 0 is the disturbance attenuation level, which means that the consensus performance of multi-agent system in Equation (1) can be guaranteed.

Moreover, the parameters of desired controller are given by

Remark 2Thus far, a solution to the addressed H∞consensus problem for a class of linear multi-agent systems subject to measurement outliers has been found by designing an observer-based control law. The main results have been derived and shown in Equations (1) and (2). For the case of measurement without outliers, the corresponding result is given in Corollary 1. In the next section, a numerical example is provided in a simulation environment to verify the effectiveness of the proposed consensus control protocol.

In this section, a numerical example is provided to verify the effectiveness of the proposed control protocol in Equation (3).

Consider multi-agent systems including five agents. Given the Laplacian matrix as

The outliers considered in measurements are unit pulse signals, which enter the second agent at k = 60 and the fourth agent at k = 80. Next, by making a comparison between the results of Theorem 2 and Corollary 1, the effectiveness of the proposed control protocol in Equation (3) can be demonstrated. In terms of the results of Theorem 2 and Corollary 1, by employing MATLAB LMI toolbox, the solutions of LMIs in Theorem 2 can be obtained as follows:

and then the simulation results are shown in Figure 1–5, which depict the compared state trajectories of five agents, the evolution profiles of σi(k), and the compared consensus errors, respectively. 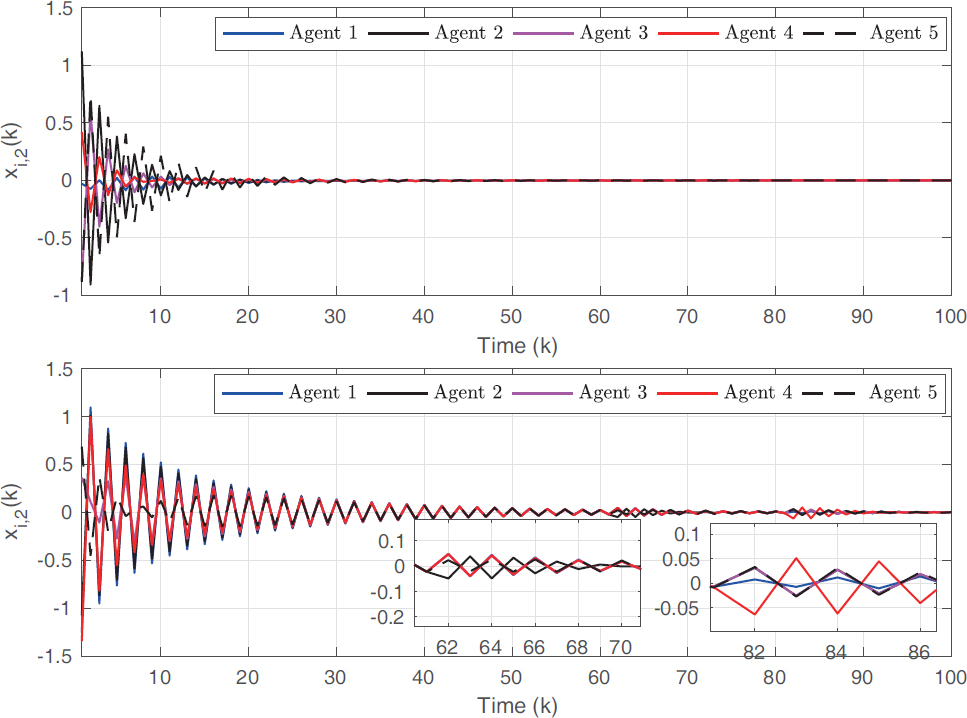 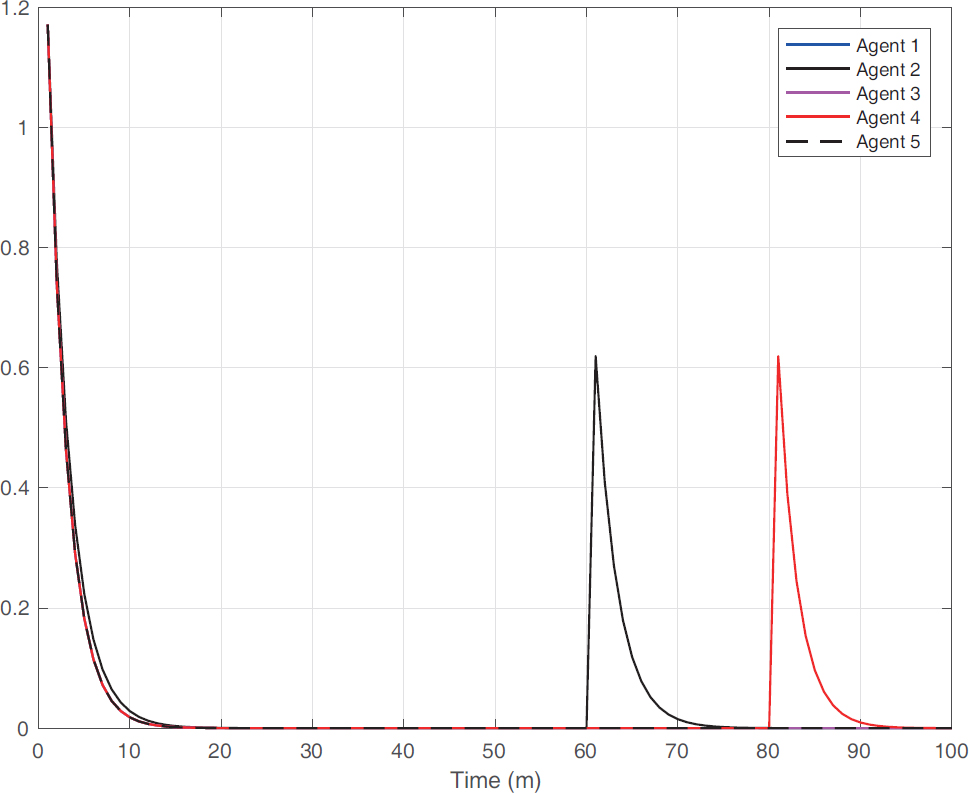 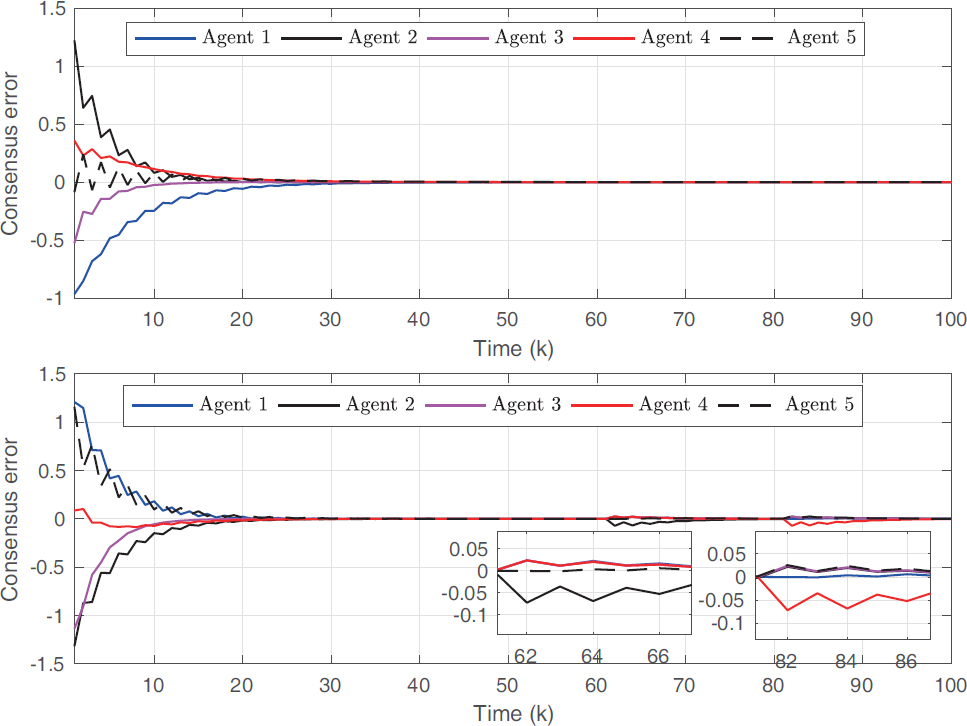 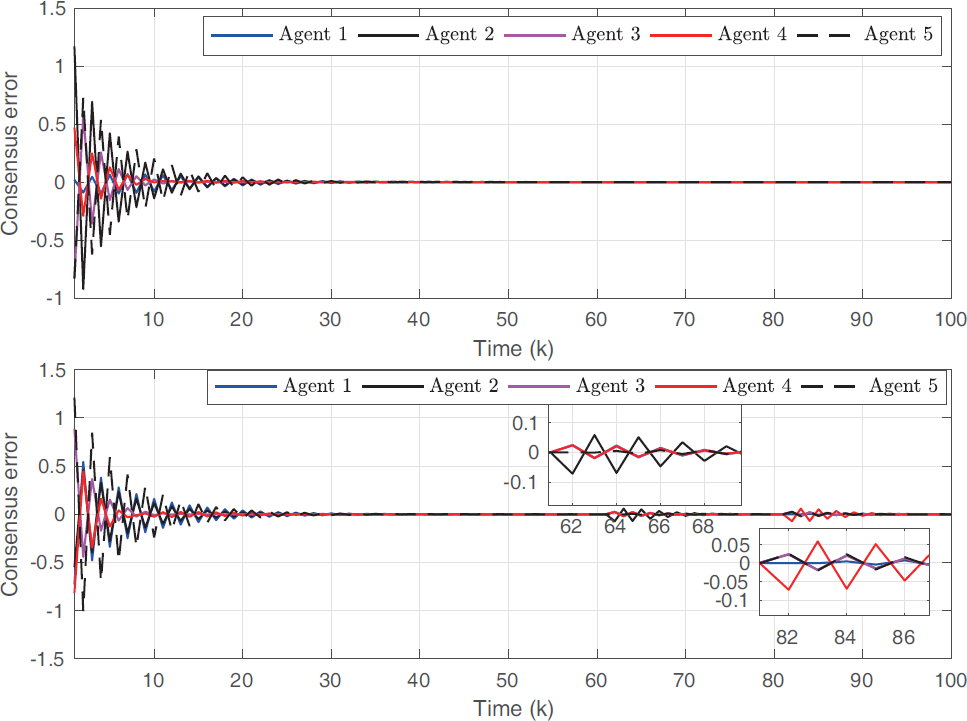 From the simulation results employing the results of Corollary 1, we can see that outliers can affect the consensus performances of the second fourth agents and their neighboring agents. The variable σ2(k) can change dynamically when outliers of k = 60 occur such that the effect of outliers is weakened. For the fourth agent, the variable σ4(k) can change dynamically once outliers occur. Based on this merit, when outliers occur, the proposed control protocol in Equation (3) can have satisfactory performance. For the first, third, and fifth agents without the effect of outliers, variables σl(k) (l = 1, 3, 5) converge to zero. For the consensus error

Moreover, to demonstrate the usefulness of the proposed control protocol in Equation (3), we choose the outliers obeying the zero mean Gaussian noise with covariance 10. The simulation results are shown in Figures 6–10. From the simulation results, we can see that the proposed control protocol has a satisfactory performance against the different types of measurement outliers. 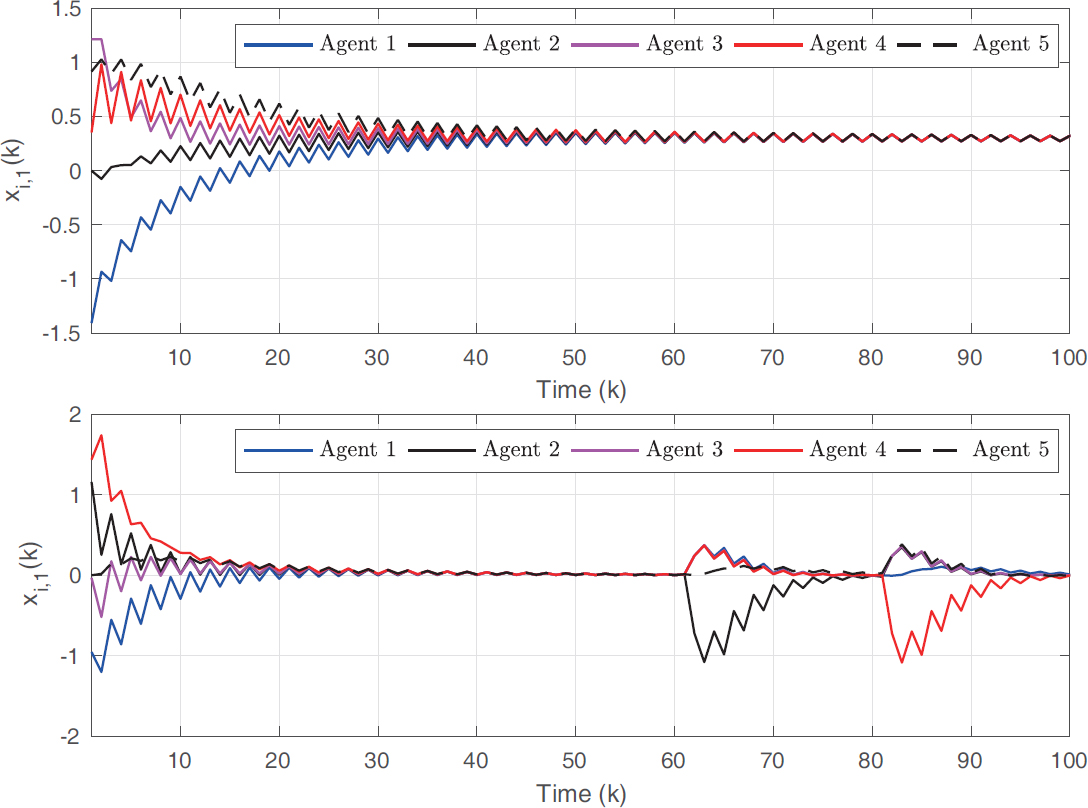 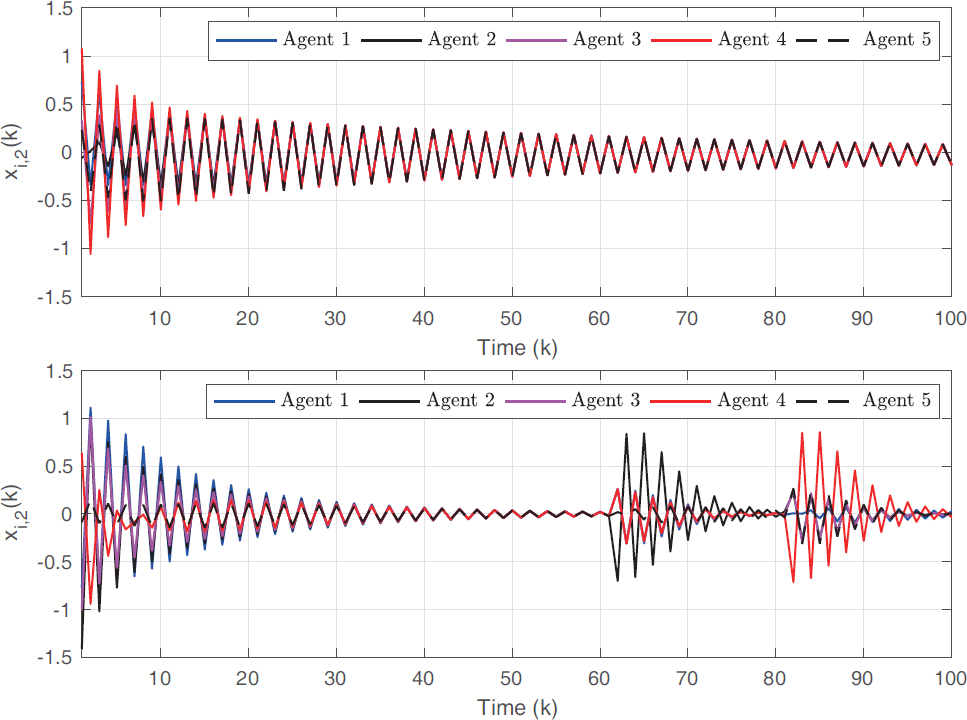 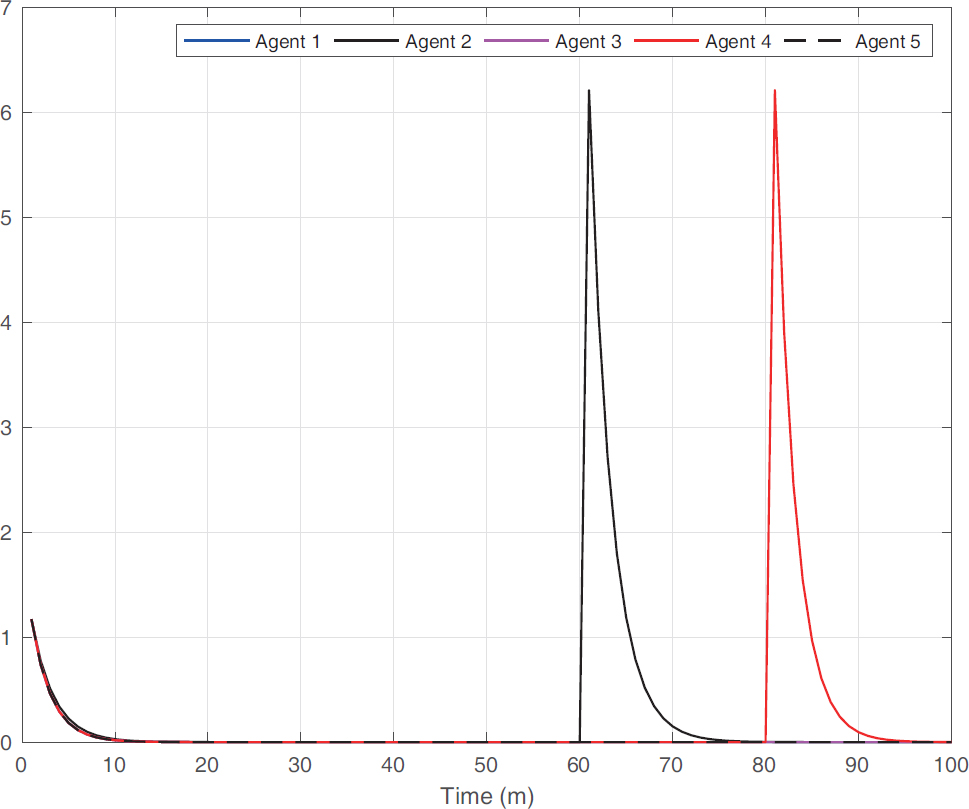 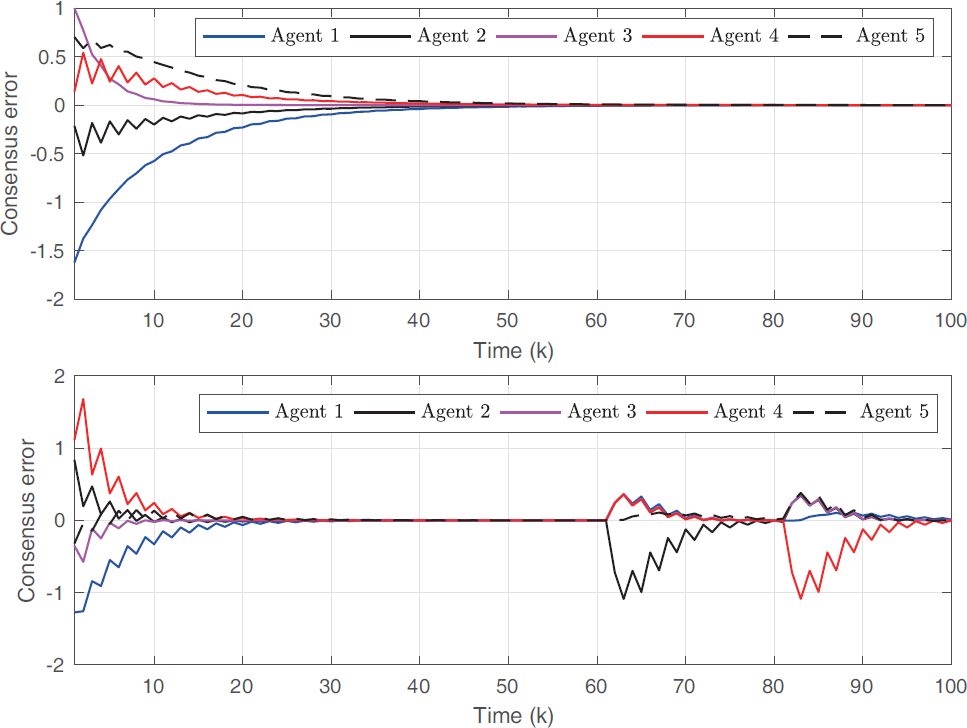 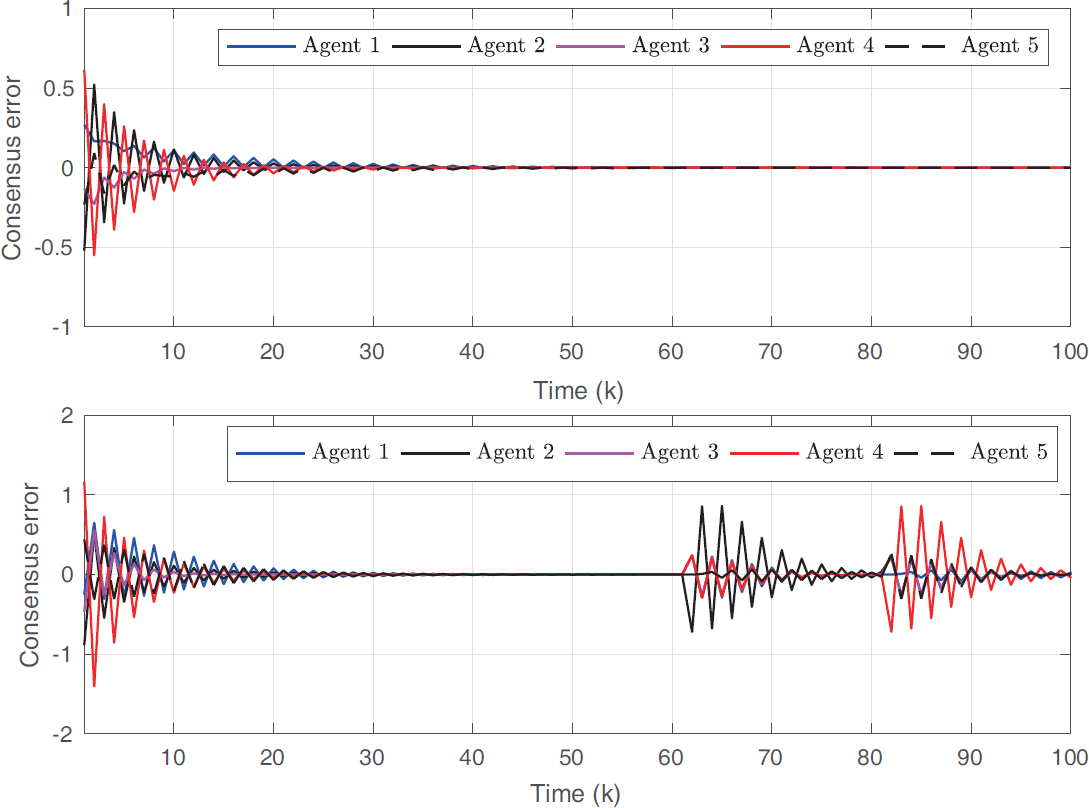 Made substantial contributions to conception and design of the study and performed data analysis and interpretation: Lu Y, Zhang N

This work was partially funded by the Italian Ministry of Education, University and Research through the Project “Department of Excellence LIS4.0-Lightweight and Smart Structures for Industry 4.0”.

Anyone who contributed towards the article but does not meet the criteria for authorship, including those who provided professional writing services or materials, should be acknowledged. Authors should obtain permission to acknowledge from all those mentioned in the Acknowledgments section. This section is not added if the author does not have anyone to acknowledge. 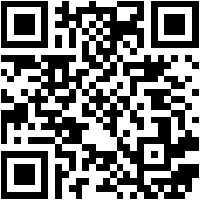