Method: This paper proposes a method to predict the damage of transmission towers under typhoon disasters considering the multi-effect of tower-line coupling, aging, corrosion, guy wire reinforcement, etc. The tower-line coupling effect uses a two-step reliability model. The first step calculates the damage probability of transmission lines. Then, we couple the wind load of transmission lines to towers through binomial distribution. The second step calculates the damage probability of transmission towers. The aging effect uses two-parameter Weibull distribution to calculate the aging failure probability. The corrosion effect uses the uniform corrosion theory to calculate the corrosion failure probability. The guy wire reinforcement is realized by increasing the mean value of design wind load for strength curves. Next, this paper uses probability addition equation to integrate multi-effect and obtained the final damage prediction results. Finally, we used the 110-kV THJ (TieHaiJia) line in Guangdong province, China under Typhoon “Mangkhut” in 2018 as an example to check the accuracy of proposed method.

Conclusion: It is concluded that considering the tower-line coupling effect to improve failure probability is closer to practice, but the reinforcement effect should not be blindly improved.

In recent years, typhoons have caused huge damage to coastal power system in China[1]. On the one hand, a typhoon may damage a large number of electrical equipment and cause difficulties for the stable and reliable operation in power sectors. On the other hand, it can result in power outage for many users and have a serious impact on industrial production and citizens’ lives. For the purpose of improving the ability to withstand risks in power system, there is a need to study the damage risk of transmission lines under typhoon disasters.

This paper proposes a method to predict the damage of transmission towers under typhoon disasters considering multi-effect. The highlights of this paper are:

The rest of this paper is organized as follows. Section 2 uses a two-step reliability model to calculate the wind load of transmission lines. Section 3 discusses the damage calculation principles under three effects of corrosion, aging and guy wire reinforcement. Finally, in Section 4, we draw a conclusion. 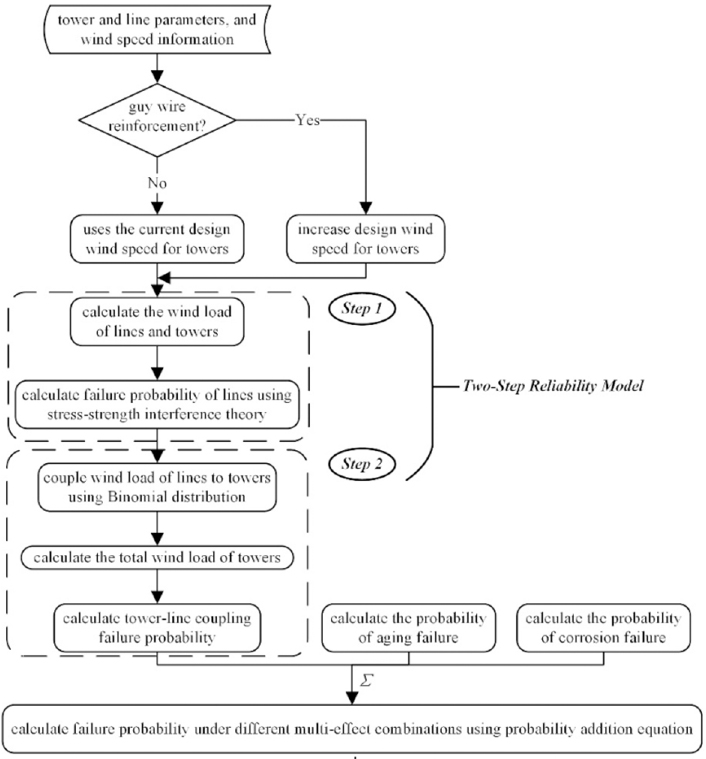 According to the calculation method for wind load of conductors introduced in[20]:

When the wind direction is perpendicular to the tower surface, the standard value of the wind load on the tower body or cross-arm is calculated as:

where WS is the standard value of wind load on the tower body or cross-arm, kN. β is the adjustment coefficient of wind load on towers, which should be adopted in accordance with the relevant provisions of the current national standards[21]. A is the equivalent wind bearing area, m2.

To couple the wind load of conductors and towers, this paper proposes a two-step reliability model. In the first step, we calculate the damage probability of conductors. After coupling the wind load on conductors to towers through binomial distribution, we calculate the damage probability of towers in the second step. Both steps use the stress-strength interference model[5].

In the actual wind load calculation, the sample with larger wind load should be selected, namely the extreme wind load[22]. We assume that the design strength of the equipment obeys normal distribution[23] and the wind load obeys extreme I-type distribution[24]. When the predicted wind speed sequence is available, we use the stress-strength interference model for calculation[5]. When only the maximum wind speed is available, we use the traditional reliability model for calculation.

This paper considers the conductors at both ends of an intermediate support are three-phase single circuit. It is assumed that the wind load of conductors obeys extreme I-type distribution and the probability density function is:

The stress of the towers and conductors obeys normal distribution:

Assuming that the conductor failure has only two states, disconnection and normal, the corresponding wind load of conductors coupled to towers are o and WX, respectively. Therefore, the coupled wind load obeys binomial distribution and the expectation wind load of the conductor of phase A on one side of the tower is:

The expectation of resultant wind load of three-phase conductors on both sides of the tower is:

We decompose the wind load on towers along perpendicular and parallel directions to the lines:

In the perpendicular and parallel directions to the lines, the resultant wind load on towers can be written as:

In the perpendicular direction to towers, we use the stress-strength interference theory to obtain the failure probability PS┴ in the second step. The calculation principle is the same as (6).

The failure law of electrical equipment aging with time follows the classic “bathtub curve”. The Weibull distribution can more comprehensively describe three stages of the “bathtub curve” and is widely used in reliability and lifetime analysis[25].

The lifetime density function of components is:

where x is the corrosion depth; lnX is the logarithm of corrosion depth statistics X, which is a random variable; mη is the mean value of lnx; and ση is the variance of lnx.

The expectation and variance of the uniform corrosion depth distribution are:

Since the mean value of corrosion depth varies greatly with time, and COV does not vary much with time, COV δx is usually made constant.

The reliability at t2 is calculated as:

where xmax is the maximum allowable corrosion depth.

where the statistics (μx, δx) at time t2 are:

Considering the influence of guy wire reinforcement on tower strength

On the afternoon of 7 September 2018, No. 22 Typhoon “Mangkhut” was generated in the Northwest Pacific Ocean. After shifting into the northeastern corner of the South China Sea on the morning of 15 September, it suddenly shifted westward, hitting the Pearl River Delta head-on and seriously affecting Guangdong province. “Mangkhut” had the widest impact area on land, the longest impact time of strong wind and the maximum gust speed among all typhoons that have landed in Guangdong province in history[29]. This case studied selected the 110-kV THJ line, a typical line with a running time of 12 years. Figure 2 shows the typhoon path and the location of the THJ line. 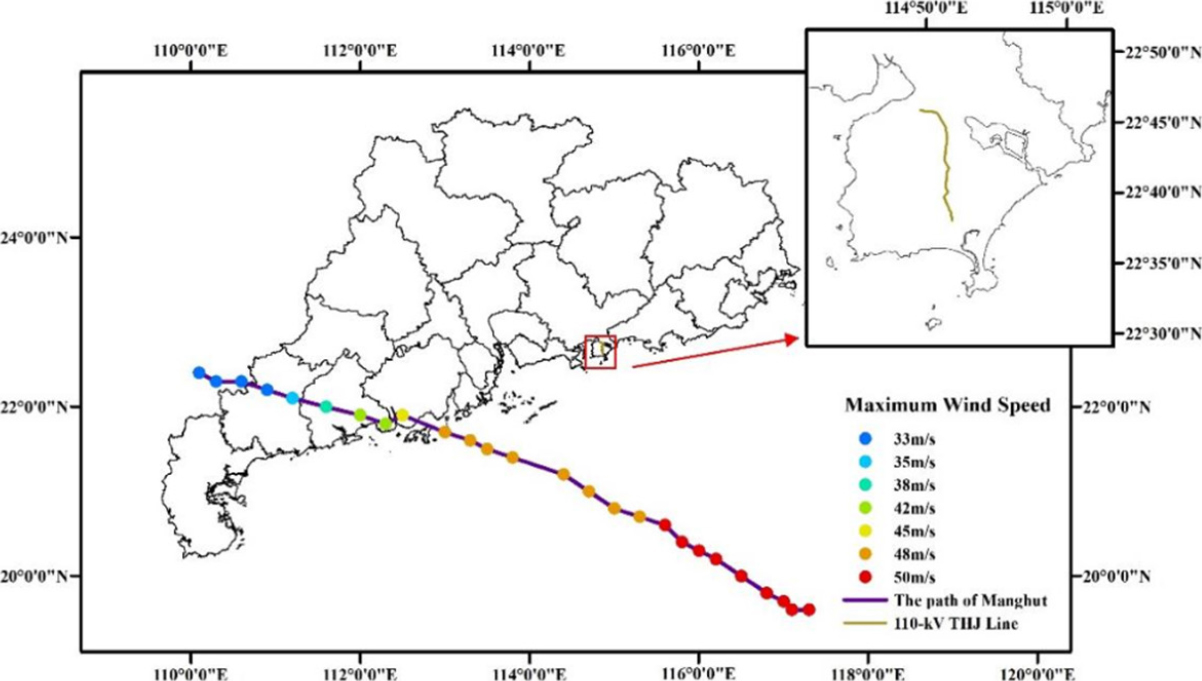 Figure 2. The track of strong typhoon “Mangkhut” and distribution of THJ line. 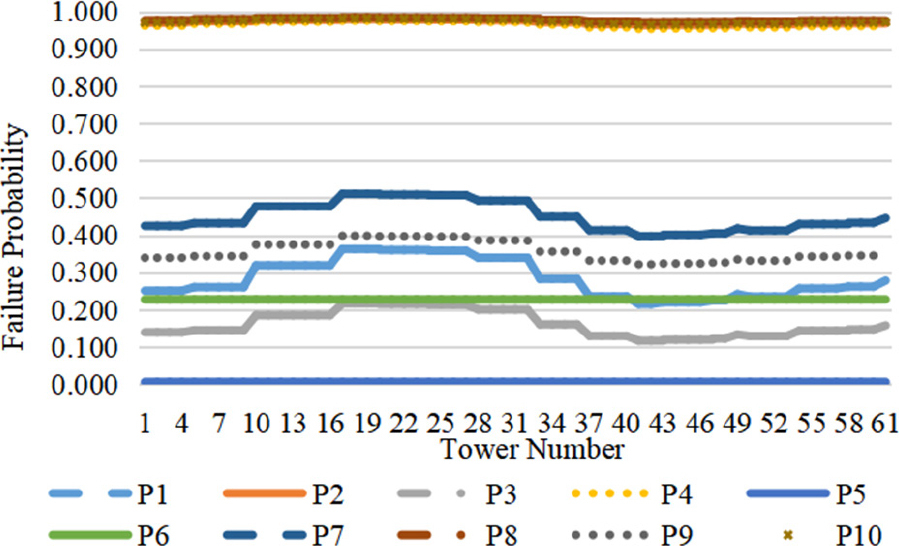 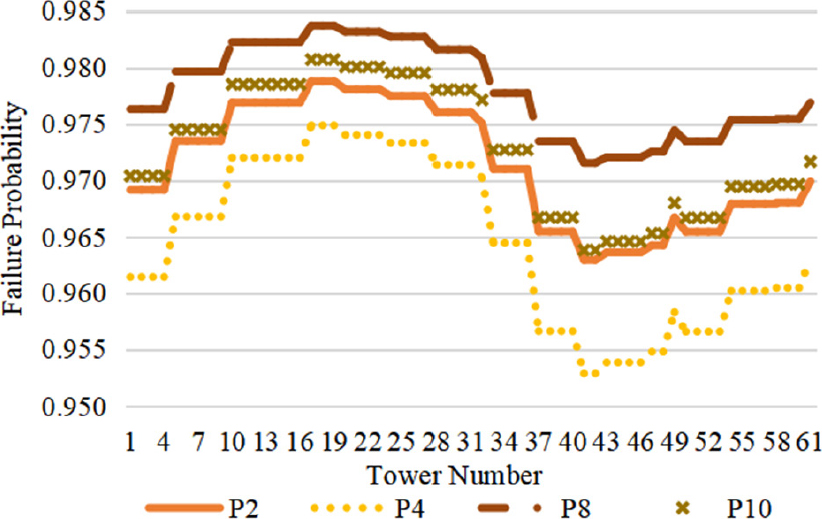 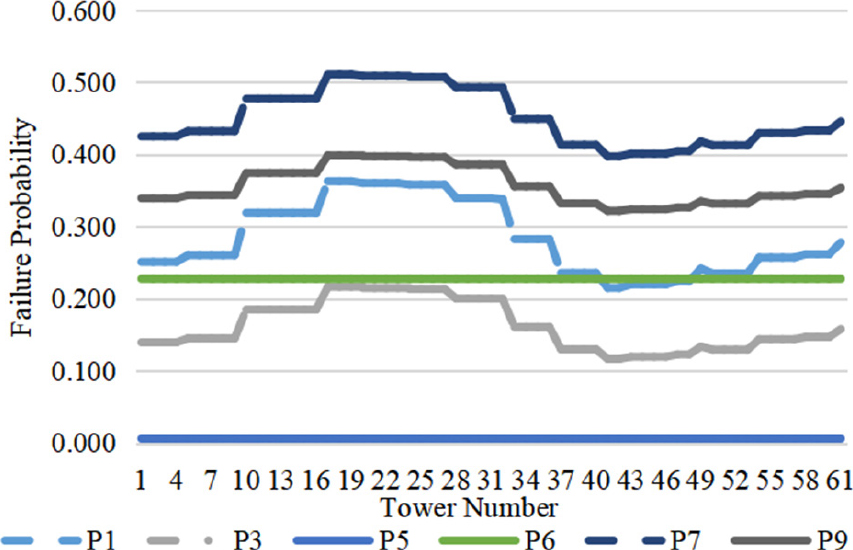 In summary, the tower-line coupling effect occupies a dominant position in the contribution of tower damage and should be considered in engineering practice.

As shown in Figure 3, we found that the damage probability of Towers 17-27 is significantly higher than the others. The main reasons are the high wind speed acting on the tower and the significant tower-line coupling effect, followed by the corrosion and aging effects. The towers actually damaged during the typhoon were Towers 19-21, and the damage reason for Tower 19 was the corrosion of the anchor rod, which broke down under the wind load. Therefore, the prediction result can reflect the real damage situation, which proves the scientific nature of the method in this paper.

This study took the wind load model of transmission conductors and towers as the research object and simulated the tower-line coupling effect through the two-step reliability model. This model can reflect the physical essence of tower-line coupling effect in principle. This paper establishes an aging failure model based on two-parameter Weibull distribution, a corrosion failure model based on uniform corrosion theory and a guy wire reinforcement model based on reliability theory. Finally, this paper uses probability addition equation to integrate multi-effect and establishes a damage prediction model for transmission lines under typhoon disasters. The prediction model was verified by taking the 110-kV THJ line, a typical line in Guangdong province, China, under Typhoon “Mangkhut” in 2018, as an example.

However, this paper buildes the damage prediction model of transmission tower-line system considering multi-effect under typhoon disasters only through the physical strength-stress interference model and does not use data mining or intelligent algorithms to analyze historical data for probability prediction. In addition, since the reinforcement effect does not significantly inhibit the tower-line coupling effect, this paper does not explore the design wind speed standard that should be achieved after guy wire reinforcement. The results show that tower-line coupling effects, aging effects, corrosion effects and the influence of guy wire reinforcement play important roles in the failure probability calculation of transmission equipment under typhoon disasters. The method with four effects considered can effectively improve the prediction accuracy.

The measurement and recording of the experimental data in this paper was done with the strong support of the staff from Electric Power Research Institute of Guangdong Power Grid Co., Ltd., and I would like to express my heartfelt thanks to them.

The data is obtained from Guangdong Electric Power Research Institute, the author will not be shared and explain it.

This work is supported by University-Industry Collaborative Education Program of Ministry of Education of the People’s Republic of China (201902056044). 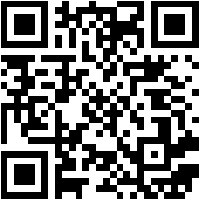